In 2020, video outpaced blogging and infographics as the most common content marketing strategy.

As users increasingly turn to video content for entertainment and education, most social media platforms have become more focused on expanding their visual and video capabilities. Now, the average social media user sees videos in the form of live streams, Stories, or Newsfeed posts on a daily basis.

Consumer preference for video over other mediums is only expected to get stronger. Although millennials watch more videos on a regular basis than Gen X and the Boomer generation, the age group’s consumption still pales in comparison to Gen Z.

As a marketer, you likely already know how effective the combination of video and marketing tactics can be.

While posting a marketing video on social media or your website might cause you to gain traffic or brand awareness, launching an ad that encourages viewers to click to your store might provide both of those benefits — plus a more direct path to revenue.

When looking into paid video promotion, one of the common offerings you’ll hear about — especially if you plan to advertise on social media — is in-stream advertising.

An in-stream video ad is a promotion created by a brand that runs before or during a video on a streaming platform, such as YouTube. Aside from appearing in popular videos, these ads can also appear in Stories or live streams on platforms like Facebook.

To give you a visual of what an in-stream ad looks like, here’s a screenshot for an Olay ad that appeared before a YouTube video I recently viewed: 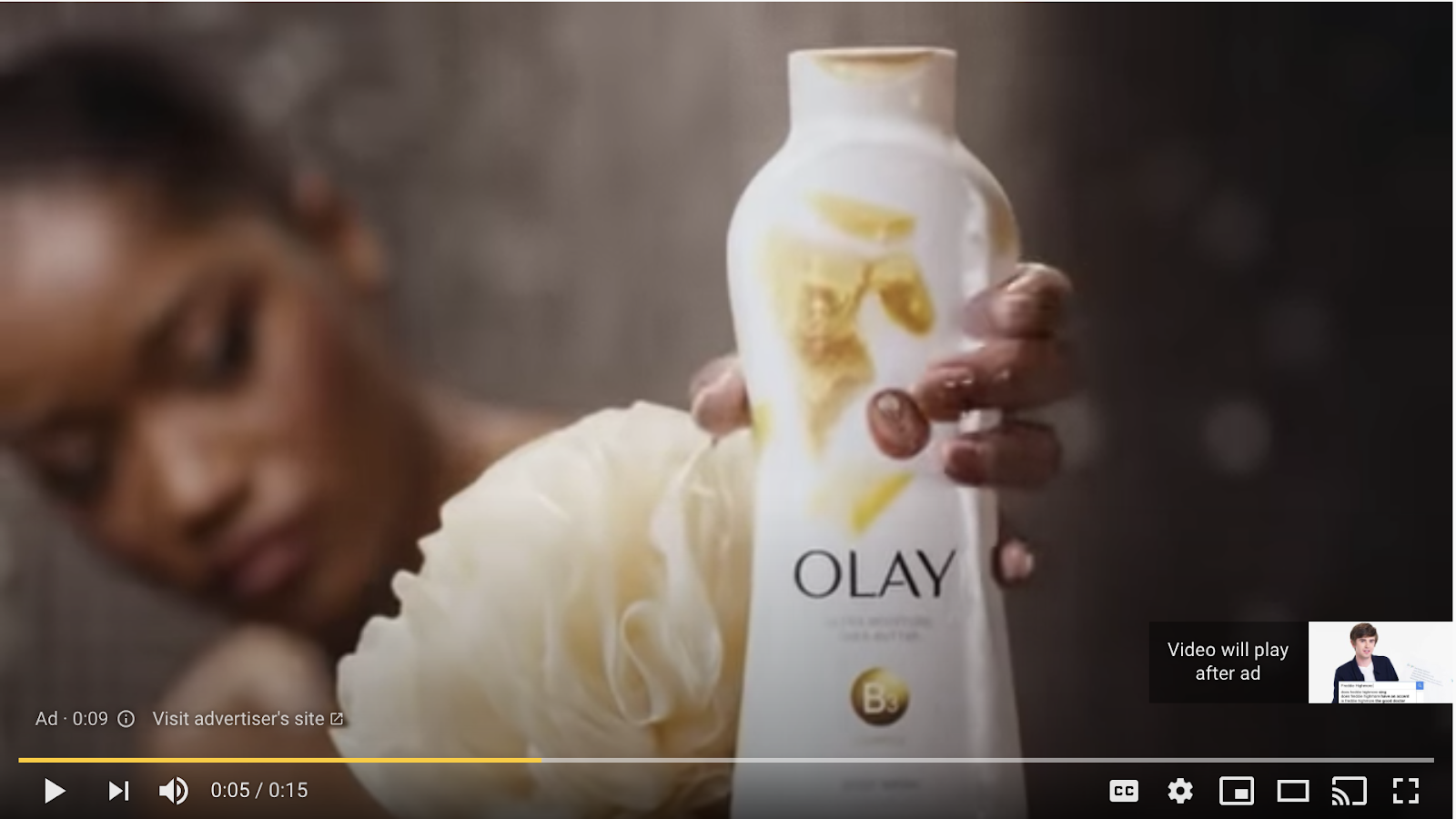 There are a handful of perks to in-stream advertising. The first is that your video can be targeted to audiences similar to your brand’s or can be placed in videos that match your ad’s keyword. With these types of targeting options, you can present your ad to viewers that match your audience’s demographics or interests. Because these viewers might have similar interests and purchasing motives as your customers, a well-targeted in-stream ad could ultimately result in a higher chance of purchases.

Another perk of in-stream ads is that these videos don’t need to be incredibly long or detailed. Depending on the platform you use, you can often launch ads as short as five seconds. While this gives marketers a limited amount of time to grab a viewer’s attention, it also means they’ll need to produce less content than they would for a long-form marketing video.

Aside from length and targeting capabilities, the last and most obvious perk of in-stream ads is their ROI potential. Even back in 2016, shortly before Facebook launched its in-stream ad offering, a Google study revealed that YouTube ads — which are usually in-stream — saw higher returns than television ads.

Although the perks above might have you ready to invest in in-stream ads, there are still a few things you’ll need to research and keep in mind.

Even though in-stream ads are shorter and can be spoon-fed to your audience with ad targeting tools, your content will still need to convince those viewers to click on the ad’s link and buy your brand’s product. This in itself can be a major challenge for video advertisers.

While successful in-stream ads are possible, there are still important user-behavior barriers that you’ll want to keep in mind as you aim to create a winning promo. To help you determine some of the biggest barriers you might run into, I surveyed 400 consumers about how they interacted with in-stream ads.

Many in-stream ads include a call-to-action that you can click or tap to visit a brand’s website or ecommerce store.

When you consider that in-stream video ads are sent to target audiences and demographics, rather than a wide pool of users, you might think that people will regularly click on this type of advertisement to learn more. However, the outlook was quite grim for in-stream ads in this particular survey:

While 42% of people say they “almost never” click on in-stream video ads, another 22% say they’ll click on an ad “once a week.” Only 22% will click on two to three ads per week, while the remaining 15% say they don’t watch online videos.

As you plan your in-stream video strategy, remember that the results above are just from one small consumer pool. Had we asked this question to a particular demographic or a group of users on a specific platform, the numbers might have been different.

Although you should continue to do research about the pros and cons of in-stream ads, you should still keep the results above in mind. This data speaks to the age-old theory that people either completely avoid ads or mentally tune them out, regardless of their format or type.

While video advertising does offer the perk of audience targeting, you’ll still need to produce intriguing, interesting, or valuable video content to be successful.

Before you start panicking about the results above, there were some optimistic findings in this survey. Although the consumers I polled are less interested in clicking on in-stream ads when they see them, they might still consider buying the promoted product.

When I asked, “Have you ever purchased a product that you learned about from an in-stream video ad?”, more than one-third of respondents — or 37% — say “Yes.” Meanwhile, 52% say, “No.”

Of those who haven’t made a purchase related to an in-stream ad, 39% simply selected, “No” while 15% say, “No. I avoid in-stream ads at all costs.” Meanwhile, 9% say they “don’t watch online videos,” and thus wouldn’t have the option to see in-stream ads or make a related purchase.

While the percentage of people who won’t haven’t made a purchase after seeing an in-stream ad is quite large, this is somewhat expected when you consider online attention spans and how most of these consumers also say they don’t usually click on in-stream ads.

On the other hand, the percentage of people who’ve made a purchase after seeing an in-stream ad is still more than one-third of the group we surveyed. This might hint that there is a solid chance your in-stream ad could result in a purchase.

The truth is, most types of online content have just a few seconds to grab a consumer’s attention. Video content is not exempt.

As with any video marketing strategy, you can’t expect audiences to watch your content just because it’s right in front of them. Video ads, which often feature a “Skip” button, might have an even smaller window than the average marketing video.

When asked, “When given the option to skip an in-stream video ad that plays before or during your video, how long will you wait before skipping?”, a whopping 37% say they’ll “skip an ad as soon as possible,” while 20% say they’ll click skip in five seconds or less.

The interest in skipping isn’t a shocker. We’ve all done it. Sometimes, we just want to watch the video we planned to stream and don’t really care about the ads that are put in front of us.

Although the result above comes from just one small group of consumers, it aligns with mounting research which shows that global attention spans are narrowing — especially online.

While the average consumer’s attention span shouldn’t scare you away from an in-stream ad strategy, you should certainly keep it in mind.

To be successful with in-stream video ads — you’ll need to create content that grabs your viewer’s attention as soon as possible and is valuable enough to ease annoyances related to seeing an ad in their video.

In this example from the job search site Reed.co.uk. The ad immediately draws attention with a video of meowing kittens. Then it embraces its pre-roll placement by calling out YouTube viewers for watching videos because they’re “distracted from their job.” Towards the end of the ad, the site’s founder, tells the viewer to click on the video, which will send them to the job site:

How to Launch a Successful In-Stream Ad

As you’ve seen, there are solid pros and cons to in-stream advertising. While the cons shouldn’t scare you from trying this marketing tactic, you should still keep them in mind in order to create a video that can avoid constant skips from your audience. Here are a few tips to keep in mind

Throw viewers into the action.

Based on what consumers told us, you have anywhere from one to five seconds to grab your viewer’s attention before they zone out or skip your ad. You’ll rarely have more than 10 seconds to sway them.

So, begin your ad with an action-packed scene or concisely explain your product as quickly as possible. Don’t take time to get to the point — even if the ad platform you’re using allots a 30-to-60-second video.

Audiences will either skip your ad because they just don’t want to see a commercial, or they’re bored by your content and want to get to their video. This is why it’s important to create ads that either entertain your viewer or educate them about a product or brand-related topic they’ll value.

Use examples as inspiration.

Luckily, millions of brands have already tested out in-stream advertising. While this means the pool of advertising could be competitive, it also means that there are plenty of effective ads out there that you can watch for inspiration.

Next time you’re watching a video that begins or features an in-stream ad, watch the content. Take a mental note of why you do or don’t want to skip the ad. If you’re considering engaging with the ad and tapping to learn more about a product, ask yourself, “How did this content persuade me to click?”

If you don’t feel like searching out ads on social platforms, we’ve also got plenty of content to help you. Check out this rundown of effective short-form ads from small businesses and Super Bowl brands.