Bitbucket vs GitHub: Which Code Repository Is Better for Your Development Projects?

Choosing a repository hosting service is a big decision. How you host your code is an important part of your work and affects your productivity. So you’ll want to make sure you choose the platform that’s most conducive to your (and your team’s) specific needs and goals.

If you’re like most developers, you’re probably using Git as your Version Control System (VCS). However, deciding where to host the source code can be challenging. Two of the most popular options are Bitbucket and GitHub, but how do you decide which one is right for you?

In this post, we’ll discuss the importance of choosing the right code repository. Then we’ll look at Bitbucket vs GitHub to see how the two compare.

Why Choosing the Right Code Repository System Is Important for Developers

Your repository hosting service is the third-party application that enhances your VCS (which in most cases is Git). The code repository you use can play a pivotal role in your development workflow.

For example, it influences your ability to collaborate with other members on your team, and the efficiency of that process. It also affects how you measure, monitor, and manage your projects. Each code repository system comes with its pros and cons. There are a handful of important considerations to take into account when comparing them, including:

Another major factor to think about is whether you’re looking for a public or a private repository. Certain platforms are better suited for one use case or the other, so it’s important to know upfront what you’re going to need.

Among the two most popular choices for source code repositories are Bitbucket and GitHub. While they are similar in many ways, there are some key differences worth considering before deciding which option is best for your development project needs.

An Introduction to Bitbucket and GitHub

However, in order to truly understand both platforms, it’s necessary to take a closer look at what each brings to the table.

Bitbucket is a version control repository hosting service, which was created in 2008 and is owned by Atlassian. This Git repository management solution is written in Python, and built using the Django web framework: 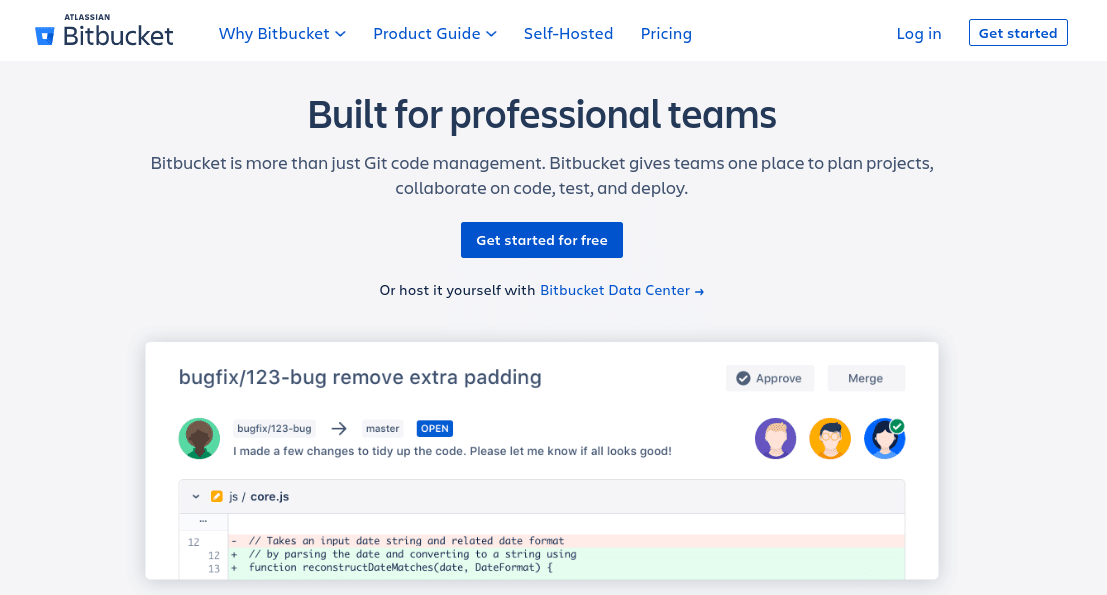 One of the main draws of Bitbucket is that it offers built-in flexibility in terms of VCS support. It also provides unlimited private code repositories for Mercurial and Git.

While you can use Bitbucket to host open source repositories, it’s primarily geared towards enterprises and businesses that are developing private, proprietary code. Another unique benefit of Bitbucket is that it offers a secure platform for your code with Soc 2 Type 2 certification.

GitHub is arguably the most popular development platform, offering one of the largest coding communities out there. With more than 40 million users and 100 million repositories worldwide, it’s widely deemed the hub for Git version control, and is the largest host of source code on the planet:

GitHub is an open source repository hosting service, which was started in 2004 and acquired by Microsoft in 2018. It’s written in Ruby and Erlang, and its primary focus is on public code. You can use it to host and review code, build software, and manage your development projects.

We grew our traffic 1,187% with WordPress.
We’ll show you how.
Join 20,000+ others who get our weekly newsletter with insider WordPress tips!


Success! Thanks for subscribing

You will receive the next issue of the Kinsta Newsletter within a week.

You can use GitHub for both your personal and business development projects. One of the biggest draws of GitHub is that it’s free for unlimited public repositories.

There are also some minor differences worth noting. For example, GitHub offers a desktop client and SVN support. Bitbucket does not, although it does provide Mercurial support. Let’s take a look at how the two platforms compare on a few other important factors.

From issue tracking to project management tools, there are a variety of extensions and apps that can help extend the functionality and usefulness of your repository hosting platform. Both Bitbucket and GitHub come with a plethora of extensions and third-party integrations for you to choose from.

From a quantitative standpoint, Bitbucket has a leg up over GitHub in terms of third-party integrations. This is due to the Atlassian Marketplace, which has approximately 2,300 apps that can be used both for Bitbucket and the Atlassian sister products. It also has cross-product compatibility, which can be particularly useful for enterprise developers:

However, the GitHub Marketplace also offers plenty of apps and ‘GitHub Actions’ that help you extend the functionality and automation of your development workflow:

These tools can help with project management, monitoring, code quality, and more. Most of the 92+ integrations available with GitHub are GitHub-exclusive.

When it comes to deciding between Bitbucket vs GitHub, another factor that might be important is their User Interfaces (UIs). After all, you want to make sure the platform you choose for managing your projects is easy to use and navigate.

Bitbucket has an incredibly clean and organized interface:

It’s simple to move around the dashboard and find what you’re looking for. Plus, the clear sidebar navigation makes finding what you need very straightforward.

As for GitHub, it doesn’t have an overly complex interface. However, it does tend to be a bit more cluttered and confusing than Bitbucket’s UI:

It can be a bit more challenging to navigate and use this dashboard, especially if you’re not familiar with it. However, while it might not be the most stylish UI, it isn’t lacking in features or utility.

Another difference that’s worth noting when comparing Bitbucket vs GitHub relates to wiki functionality. Having a wiki is incredibly useful when it comes to collaborating and communicating with other team members and developers on your projects.

With Bitbucket, you can enable a wiki for each of your repositories, and choose whether to make them public or private:

The wiki settings page in Bitbucket

Unfortunately, unlike with Bitbucket, free private repositories on GitHub can’t have their own wikis. Only the free public repositories can.

Need a blazing-fast, secure, and developer-friendly hosting for your client sites? Kinsta is built with WordPress developers in mind and provides plenty of tools and a powerful dashboard. Check out our plans

Conversely, GitHub comes with a Projects tab by default, while Bitbucket does not. However, you can link your Bitbucket repository directly to Trello, which serves a similar function.

In GitHub, the Projects tab includes a built-in Kanban solution:

This means that each project has its own board. Although those boards don’t have as many features as Trello, they’re sufficient for many planning and documentation purposes.

Both Bitbucket and GitHub enable you to grant users access to specific branches.

Let’s say you don’t want a team member or collaborator to have full access to your repository. Instead, you can configure the permissions to restrict their access to only an individual branch.

One of the advantages of using Bitbucket over GitHub is that it includes this functionality for free on every plan. With GitHub, although you can enable branch restrictions for free on public repositories, you can only enforce them on private repositories with a paid plan.

Bitbucket is geared largely towards businesses and enterprises. As such, the majority of its users rely on it for private repositories. On the other hand, GitHub is the largest host for public code, and in turn, has a huge open source community.

From a sheer numerical standpoint, there’s a bigger community involvement to tap into with GitHub than there is with Bitbucket. If your goal is to reach as many developers as possible, GitHub is probably the better option.

This isn’t to say there isn’t any support or community base for Bitbucket, however. In addition to a large user base, Bitbucket also offers online support, including webinars, tutorials, and an extensive collection of documentation.

Since both Bitbucket and GitHub offer private and public repositories, your decision may be largely informed by pricing and more specifically what you get for that cost. Of course, your needs and resources will differ based on whether you’re an enterprise company, a freelancer, or a small team.

Let’s start with Bitbucket’s pricing. On its free cloud hosting plan, you can create unlimited private and public repositories with up to five users. This includes 1 GB of Git large file storage (LFS) for storing large non-text files. After that, rates increase by $3 per user per month:

For its self-managed hosting, Bitbucket offers a tiered pricing structure based on the number of users you have with some discounts. If you’re looking for enterprise-level hosting at a Bitbucket datacenter, prices start at $1,980 for 25 users.

GitHub is free to use to create unlimited public and private repositories, with no limit to the number of users you can have. The free plan also includes 500 MB of storage.

GitHub’s enterprise-level pricing — called GitHub One — isn’t’ publicity available and requires you to get in touch with sales. Also, GitHub doesn’t offer the self-managed hosting option that Bitbucket does through its data centers.

Choosing the right platform to host your source code between Bitbucket vs GitHub can be tricky. However, taking a close look at these popular and established repository hosts is a great place to start.

As we’ve seen, both Bitbucket and GitHub have unique advantages that make them well-suited to certain types of development teams:

Now, it’s your turn: what’s your take on the Bitbucket vs GitHub challenge? Let us know in the comments section below!

The post Bitbucket vs GitHub: Which Code Repository Is Better for Your Development Projects? appeared first on Kinsta Managed WordPress Hosting.